After reading a dozen b 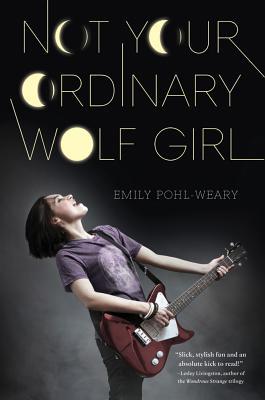 ooks I didn’t care for this one was a breath of fresh air. It was fun, suspenseful and I read it in two quick sittings. A perfect book for fans of Buffy the Vampire Slayer.  A shy musician’s transformation in a werewolf is a light, fun, supernatural read  with a strong female lead. Some of the reactions of her friends were unrealistic and something we learn about the main love interest at the end made me rank it lower than I would have. Enjoyable but not overly memorable.

I think the truest testament to how engrossed I was in this novel is that I didn’t notice the text was in red ink until about halfway through. When I’m really into a story I forget about the physical object in my hand and the individual words and it all just flows like a movie in my mind, only more intimate, like I’m experiencing it. This is how Forever felt for me, although I have to say after a few hours that red text hurt my eyes.

When I reviewed Linger (the 2nd installment in the trilogy) I expressed some disappointment with how the series was progressing but Stiefvater made up for that disappointment by coming through with a fantastic finish.

“I was a radio tuned to all stations at the same time, so many thoughts inside me that none of them counted” (107)

The characters were incredibly relatable, with genuine reactions to the events in their lives, and distinct voices as the narrative shifted. I never had trouble telling who the narrator of a particular chapter was even though it jumps around and I tend to skip over the name above the chapter when I’m really into the action.

I’d always had trouble with Grace, relating more to Sam but I think Grace’s character development blossomed as she struggled with her new identity in this novel.

It’s funny that Cole and Isabel’s relationship began as purely sexual attraction, and Sam and Grace shared a bed for months without going there, but their sexual chemistry was far more compelling.

“She fisted a handful of my T-shirt; the action woke me up instantly and guiltily made me think of at least four things that were not bedtime stories or selfless ways to comfort a grieving girl” (185)

The tension in Sam’s point of view when he’s having feelings for her despite the horrible circumstances and feeling guilty that when they are in danger he’s distracted by how close he is to touching her was really well written. There’s a section where he’s fantasizing about the life he wishes he could have with her, and I loved the first half where he was imagining her studying next to him as he reads, and the simple joy he gets from being in a room for her.

There was quite a bit of action in the novel, with people being torn apart by wolves and the big hunt looming made it suspenseful, however my favourite parts were the introspective moments. Each of the characters struggles with being defined by their history, there is a beautiful balance of their personalities being shaped by their upbringing, and defying what’s done to them. Sam is suspected of being a terrible person because of how he was abused. Someone asks how he could be anything but a monster having been treated as he was by his biological parents, and he wonders himself if Beck has raised him to be monstrous. Grace’s neglectful parents have instilled in her a sense of independence. Cole’s drug abuse and suicidal tendencies and Isabel’s confrontational, cold nature are equally explored.

Being a bookworm myself I enjoyed the various take’s on Beck’s library. All of the narrators view it differently but I prefered Grace’s interpretation.

If you haven’t read this series or if you’ve only read the first installment, I’d say Forever makes it worth the read.I doubt the movie will do it justice.

What if little red riding hood was more like Buffy the Vampire slayer only slaying wolves instead of vampires? Jackson Pearce’s novel Sisters Red is a fabulous contemporary take on the classic fairy tale.

What you can expect from this book:

If you’re a fan of the show Supernatural (I loved the first couple seasons) you will find that Sisters Red shares some plot lines. I coul hear “saving people, hunting thing, the family business” tagline in my mind as I read. Scarlett is like Dean-completely absorbed by life as a hunter, living for the kill. Whereas Rosie is like Sam and wants a chance at a normal life despite the knowledge of monsters.

Pearce did not choose character names arbitrarily. Aside from the fact that Scarlett and Rosie both have names deriving from shades of red (apropriate for the red riding hood story) each individual’s name is very fitting for their character.

SCARlett is a scarred character. She is physically marred and emotionally traumatized by the violence she experienced at a young age.

Rosie sees the world with rose coloured glasses. She’s an optomist, who believes there is more to life than revenge and work. She is the youthful rosie cheeked sister that is great bate for the wolves.

Silas means “man of the forest”, something his Pa would have named thinking he would keep up the family profession of being a woodsman. This name takes on more meaning later but I’ll try not to spoil things for you.

Nightshade by Andrea Cremer was an enjoyable read.

Calla Tor has always known her destiny: After graduating from the Mountain School, she’ll be the mate of sexy alpha wolf Ren Laroche and fight with him, side by side, ruling their pack and guarding sacred sites for the Keepers. But when she violates her masters’ laws by saving a beautiful human boy out for a hike, Calla begins to question her fate, her existence, and te very essence of the world she has known. By following her heart, she might lose everything-including her own life.

Calla is a strong leading lady. I enjoy that as an alpha female she isn’t hesitant to use her authority when she needs to but she doesn’t oppress her pack and prevent them from being themselves like some of the other pack leaders. She takes her role seriously but not because she likes the power, because she feels she is responsible for her packmates. She is put in horrible situations where those with greater authority than her abuse their power and take sexual advantage of young people (mature subject matter in this book!) and she is torn by her respect for tradition and her own morals. Her hormones are out of control and that’s partly a teen thing and partly a wolf thing.

Ren surprised me, I’m never sure if he is going to kill someone in a jealous rage or be a sweetheart. He’s an interesting character and I’d like to read more about him but I don’t think I’d want to get involved with him personally. However Calla’s a lot stronger than I am and could hold her own better if he lost his temper.

Shay is a bit too cookie cutter for me. Insert cute, mysterious boy you are forbidden to be with here.

For the most part pretty predictable, but sometimes I’m in the mood for that. The end leaves you hanging and confused about whether everything you predicted that seemed to come true a second ago actually did.

She can control her pack, but not her heart

I want to start by looking at the gorgeous cover. The image is very striking and to be honest one of the reasons I picked up the book.

The flowers are chosen because of Calla’s name. Only Ren calls her Lily, and the flowers are bloody, making the reader wonder what her arranged marriage with Ren would be like.

The “t” in Nightshade is the symbol for Scion and it drips blood onto the lilies. This brings Shay into her bloody future. Is she risking her life by helping him?

I love the way her white hair takes up more space on the cover than her face. The white windblown hair seems to represent her wolf-self that she states in the book is always there beside her waiting for her to change forms.

Her eye is breathtaking. It’s striking colour captures our eyes immediately. The eye sums up Calla:

My major problem with the cover is her makeup! It looks beautiful with the eyeliner and eyeshadow emphasizing her wolf eye and the sparkles matching her hair and the flowers. Her lipstick fits well with the rest of the cover’s palett…BUT in the novel Calla makes a point of saying that she does not like to fuss with her appearance. Even when she is being forced to wear dresses instead of jeans and a T-shirt she refuses to wear makeup, even on the fancy occasions where it’s standard to go a little over-board with makeup (balls, weddings….). Calla want’s to appear tough and competent not frivolous and girly. She dislikes that being a mate is such a big part of being an alpha.

Now on the inside of the book I have a problem with the enormous waste of paper! At the end of each chapter there is a blank page, and then a black page with a moon and the chapter number, followed by a blank page and then the beginning of the next chapter.  If you want to use the moon to remind people they are reading about werewolves or to show the passing of time then put it in the big empty space you left anyway at the top of the page of the beginning of chapters. Extensive killing of trees aside, the moons upset me because Calla explains to Shay that the moon has nothing to do with her pack, that’s just a human superstition.

Error: Twitter did not respond. Please wait a few minutes and refresh this page.