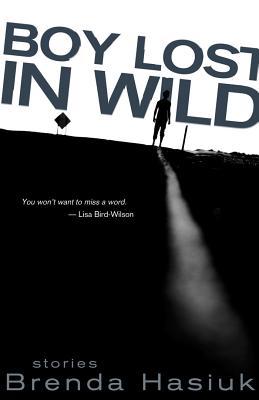 All the short stories in Brenda Hasiuk’s book Boys Lost in Wild are connected. They are linked to at least one other story in the collection by a character crossover, but more than that they are linked by a theme. All of the stories deal with displacement and race. The characters in this story have different backgrounds but all of them are complicated. Every character has an experience out side of the realm of normalcy for them. As they brush with new social classes they learn about themselves.

Hasiuk succeeds in demonstrating that people have many layers. She explores otherness. In many cases teens wanted to explore heritage rejected or forgotten by the previous generation.

Each story is preceded by a few facts. These facts frame the story for the reader, providing a historical or sociological context.

I would recommend this for mature teens.

The title of the collection is definitely accurate, these are not tales for children! On the other hand I think select teens will find it pretty amusing. It’s hilarious in an absurd, disturbing kind of way. I adored the evil juice box, because the concept and the drawings were pure awesomeness. I was fascinated by the weird exchange student’s story. A couple stories were a bit nauseating, but I’m a wuss and I know others who would find them delightful.

This would make a great gift for the whimsical, dark-humoured person in your life. Take note of the people on the cover of the book, these are not characters in the book but hyperbole of people’s reactions to it.

The second half of the collection was less exciting for me than the first half but I did enjoy it. Link’s stories have a post-modern feel, and I enjoy this as an English major who likes complicated stories to dissect but I worry it would be confusing and off-putting to many teens.

Several of the stories are doubly framed, in the sense that there is a story within a story, within a story. I enjoy the connections between the layers of the stories, but the way it’s put together we never get the full story of any of the characters, and I am occasionally left unsatisfied.

There is also more metafiction than I think is called for in the anthology. What this means if you are unfamiliar with it, is that the narrator addresses the audience directly, points out the fact that they are reading. She words it cleverly so it is sometimes enjoyable but I find it still disconnects me from the story, and I prefer to be immersed in the action.

An interesting read overall, and something that could be discussed at a book club but not for the average teen.

Pretty Monsters is a collection of stories by Kelly Link. It caught my eye in Chapters almost a year ago, with really cool cover and a nice title. I put in a request for purchase with the library and suspended my hold until now because I had such a big TBR list but voila here it is on my desk this week.

I loved this story, but not because of the pretty monster. I actually strongly prefer the half of the story before she comes out of her grave. I think Link has a good handle on grief, and young love. I thought the way Miles had the urge to go home and tell his girlfriend all about the events of her funeral rang very true. Nothing felt complete before he shared it with her, and he forgot for a moment that her being gone was the reason for the funeral. I think the way Link describes this is beautiful. I wanted to cry (resisted because I was in the break room and weeping at work is generally frowned upon) but at the same time the narration has a light, almost silly tone that keeps it from getting too depressing. I’m not so sure about the second half of the story. I feel like more explanation is needed about why the girl is animate.

The Wizards of Perfil

I love the way Link describes the psychic connection between the cousins. My favourite part of the story is when she’s fishing and he’s on the train, because they flow between one another’s worlds so fluidly. I predicted the end of this story but I still think it’s a great idea.

Despite the fact that the title has pretty much nothing to do with the story this one is awesome. Random as could be, but incredibly entertaining. The mysterious and random show the characters are obsessed with reminds of the video clips in Pattern Recognition by William Gibson.The story was perfect for me because

Those things will make sense when you read it, and you should. It is very silly but I love it, it reminds me of what my dreams look like. I kinda wonder if Kelly Link just wrote down a complicated awesome dream she had and filled in the fuzzy blanks.

As a frequent Scrabble player and eccentric lady, I relate to the grandmother in this story 😉 The handbag reminds me a bit of that awesome bag Hermoine had in Harry Potter, that could hold anything, only in this story the girl does not have the “accio” spell to find what goes into it. I find the story of the grandfather familiar, but not sure where I’ve seen something similar.