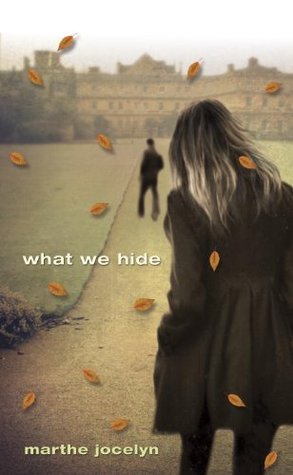 What We Hide is a tapestry of teen angst. Many perspectives make up the quilt of the story, all patched together with the common setting of the English boarding school. Most of the characters have secrets, family they are ashamed of, insecurities about friendships, identity crisis, and a lot of pent up sexual frustration.

Since my focus at the moment is Canadian literature for teens, (and this technically qualifies because Marthe Jocelyn is Canadian) I find it difficult to read about English teens and American teens spending time in England. Especially the way Canada is referred to in the first chapter, this doesn’t feel Canadian. The British slang is amusing, and made less confusing by Jenny’s American perspective.

The story is set in the time of the Vietnam war but the way the teens talk and interact feels contemporary. Perhaps I was overly sheltered or naive but I didn’t have nearly as much sex going on in my high school decades after this story takes place and I find it surprising how much is going on in the novel. Many of the characters had or become teen parents, something that I often hear older people complaining about as a “new” phenomenon because of shows like Teen Mom.

There’s good diversity of characters, with representations of more than one ethnicity, sexual orientation and social class. However, all of them feel defined by those characteristics.

I think this story might work better in a different medium, perhaps television? I felt jolted as it jumped from person to person. Format to format. Although I enjoyed the letters embedded in the text the scripts didn’t flow as well.

This One Summer is a graphic novel by Mariko Tamaki and Jillian Tamaki. It’s a coming of age story about two tweens who have spent the summer together for years but are at an awkward age where the things they used to do aren’t “cool” enough anymore. First conversations about sexuality are handled well in the novel- I think the mix of curiosity, disgust and longing was right on. The girls get emotionally invested in the lives of the clerks at the video store. Eavesdropping, spying and renting movies that are too mature for them for a chance to speak to the older boys become as much a part of their summer as their usual beach time.

The book also focuses on how the problems the parents are going through impacts the kids. Depression, tension and grief experienced after a miscarriage aren’t communicated well with the girls and they are confused about the one girl’s mother distancing herself from the usual family fun.

The art did a great job of portraying emotions. Ranging from realistic facial expressions to an awesome panel with a symbolically twisted up stomach twitching nervously. I liked that despite their conversations about sexuality the young girls were not portrayed in a sexualized manner. They were curious about what others were doing and what they’d be like next summer but they were drawn like children, and not in an exploitative manner. The author and illustrator collaborate really well together. The words and images meshed so well I could have believed the same person did both. This is a complement because I think they communicated well about the tone and characterization.

This is the winner of the CLA Young Adult Book Award for books published in 2014. They have done a fantastic job of showing us how profound graphic novels can be, while still being fun and accessible to youth. 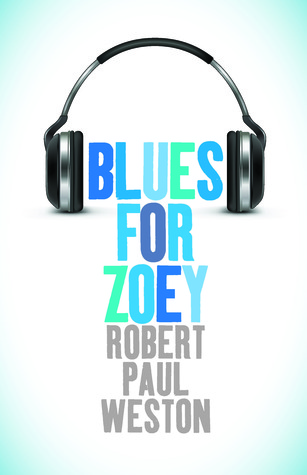 Blues for Zoey is a zany, exciting, touching novel for teens. Robert Paul Weston has mastered conversational writing. Kaz’s perspective is honest, naive, and amusing. The book manages to combine the awkwardness of young sexuality, the difficulty of caring for a parent who is ill, suspicion of a murder, and a love of music.

*I won Beauty Queens by Libba Bray from YABookshelf

This novel was laugh out loud funny in a witty way. The hyperbole of commercials, product placement, obsession with appearances, shady corporations and politicians was humourous and cutting. Misogyny, racism, homophobia, and the shallow artificial of reality TV are explored through satire. The footnotes were hilarious and really made the book stand out from anything I’ve ever read.

I think this book succeeded in expressing the message the novel XVI attempted to. It explores the mixed messages that girls are given about their sexuality. They are pressured into being sexualized at a young age but are not supposed to feel desire, only inspire it. The media tells the girls in the story that being sexy is everything, but having sex is wrong. Libba Bray’s writing is feminist and empowering, but she pokes fun at the female characters even more than the males. It’s not anti-makeup but is a bit didactic in the push for better priorities.

I’m having trouble summing up this book. It’s like if Lord of The Flies was interspersed with commercials, sex scenes, and with a funny feminist edge. One of the characters compares their situation to Lord of The Flies and comments that the boys in that book lost their humanity on the island, but the girls in this one had to go to an island to find theirs. To stop being what people wanted them to be, and just be themselves.

I also enjoyed the V-for-vendetta like plot about the fake terrorist attack and murder of their own people as an excuse to go for the resources of a developing country. This is unfortunately something we need to think about, what with fear mongering, greedy politicians abound.

I think this would be an awesome book to go along with media awareness curriculum, but that doesn’t mean it isn’t enjoyable as a casual read.