I was hooked by this graphic novel in the beginning. A contemporary story about a nerdy girl who can see ghosts has so much potential. I am always looking for graphic novels or comics that can appeal to young teens and/or have well written female characters.

Unfortunately I found this one to be too didactic. It was clearly from an adult’s perspective and felt like a story a parent would tell a child not an authentic young person’s voice.

I liked the art and there were elements I enjoyed but I feel like if I use them with my teen book club I might be too obviously teaching a lesson.  Maybe it would be better in a school setting, to discuss bullying or peer pressure. It just didn’t quite make it for me as something  most teens would fully enjoy in their free time.

Capricious is the sequel to Audacious by Gabrielle Prendergast. Every page is populated by beautiful verse. The poetry of it delights me. The imagery and stream of consciousness flow in a way that convincingly portrays the angst of teen life.

I felt it begun too abruptly, jumping right into her loss of virginity. The rest of the book I loved the gritty bits of desire and drugs but they were always framed successfully by her quirky observations of the world. The first page and chapter only work well if you’ve read the first book – which is unfortunate.

I can forgive this false step because of the mastery in the rest of the writing. From comparing a bikini wax to the chopping down of rain forests to the musings about loss of faith, Prendergast makes words into art with fantastic diction and tempo.

Often flawed characters are the most endearing. Ella’s questionable morals and decisions such as juggling two men don’t make the reader hate her because of the way Prendergast writes her internal struggle. She is finding pieces of what she needs in each of the young men- but neither of them is capable of making her feel whole. I think the struggle to understand relationships and love is well played out. The narrator is not a shining role model for teens, but feels like a real person shaped by her traumas, hopes and fears.

One of my favourite passages was where she describes the bus kneeling in supplication for Marika. The girl who’s disabilities don’t detract from her beauty and queenly personality. At one point she describes school as a “dystopian death match” with students writing essays in the blood of their classmates. The competitive nature of high school is reflected on repeatedly- comparing students to coyotes who are fighting for territory and dominance. This is a novel that tackles the tough topics of peer pressure, addiction, religion, relationships, illness, and depression. It doesn’t choose one above others and feel forced or didactic. Instead it succeeds in demonstrating how all the issues can pile up, drowning the people who are surrounded by varied struggles.

Ck. Kelly Martin’s novel The Sweetest Thing You Can Sing is an emotional drama.

The book explores the balancing act of being in high school, where girls are ostracized for being too uptight and chaste, or are taunted and humiliated for being too promiscuous. This is amplified with the prevalence of social media because word or even video of every mistake can spread quickly. The conflicting pressures from boys, friends, and family can be overwhelming as demonstrated in the novel. 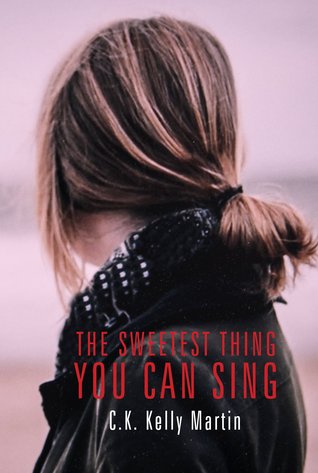 Serena has a complicated family life that has an impact on the rest of her relationships. Her favourite brother’s drug problems and disappearance leave her with mentally absent parents. Her other brother’s fame overshadows her, as she struggles to deal with the loss.

The author does a fantastic job of making the everyday struggles resonate. From insecurity about her weight, to a mix of excitement and shame about her sexuality, to the disillusionment she feels about her role-model turning out to be flawed- Serena feels like a real person.

Teens looking or realistic drama will enjoy this.

In this novel Teegan witnesses the murder of two close friends but she pays so much attention to the boy who is dying that she doesn’t see the killer. The book is about how victims are often made out to be criminals, judged by what happens to them. The boys who die are criminalized, and Teegan is seen as cooperating with the killers when she can’t identify them.

The horrible treatment of Teegan by everyone at her school, including her best friend and sister is very upsetting but portrayed convincingly.

This was an upsetting book to read, not really my cup of tea (ok I don’t like tea either) but it was well done and brought up some interesting and relevant issues for contemporary teens.

Fury is a story about a couple of high school students on winter break in the wake of one of their classmates attempting to commit suicide . There are some interesting supernatural elements, but the author uses this to tell her realistic story rather than shaping a story around supernatural creatures. You’ll love it if you’ve ever:

Em is a very believable character. She makes mistakes and isn’t always a great friend but I liked her because I understood where she was coming from. Miles does a fabulous job of making everyone’s motives very clear, the characters make realistic choices in fantastical situations.

The novel explores the consequences of these issues from people on both sides. How does a bully feel when the kid they pick on jumps off a bridge? Without being overly preachy this book emphasizes the concept of what goes around comes around, and encourages teens to think about the huge ramifications a few words they say or a picture they post can have on someone’s life.

The cover is breathtaking (gorgeous woman with fire for hair),  and the mysterious supernatural story will go off your shelf like hot cakes, but because of the issues it deals with it’s also an ideal book for a book club. Lots of discussion to be had!